I looked down at the boy-whore I’d tied to the bed and wondered when he’d wake up. Or if; I’d hit him pretty hard. I hoped he would. I wanted him to be awake. It’s not as much fun if they don’t know they’re dying.

He’d been hustling as hard as he could. I spotted him turning the corner off the main drag and had followed him down a side street to pick him up, making damn sure no one saw him get into my car. It looked like he’d struck out so far tonight, which was surprising. He was short but muscular, very well built, with long hair worn in a kind of mullet. And there was no question he was on the make. Combat boots and jean cutoffs, with nothing but a leather vest above, showing his sculpted chest and abs—he might as well have had “slut” tattooed on his forehead.

Perfect. He’d probably fight, but there are ways to solve that problem. And no one misses the whores.

As it turned out, there was no fight. He asked me to pull up in an alleyway so he could run into a house about halfway down and buy some crack. The tire iron I keep in the back seat comes in handy sometimes; he was just turning to open the door when I cracked him in the skull with it. Instant ragdoll.

Not for the first time, I was glad that I’d rented a miserable little apartment in a bad neighborhood. As none of the exterior lights ever worked, no one saw me carry my latest fuckmeat inside. I laid him facedown on the bed and pulled his shorts off. He got to keep his boots and vest—they were no obstruction to my fucking him.

I locked him into place by looping lengths of rope around his boots and tying each one to opposite sides of the headboard so his legs would stay spread. While cuffing his hands in front of him so they’d be pinned under his body, I noticed a trickle of blood from his ear and wondered if I’d fractured his skull. I’d still fuck him, of course, but it’d be a shame if he didn’t wake up.

Fucking them feels good, but inflicting pain and terror gets me off. What can I say? I’m a sick fuck.

But I have a helluva good time.

And I was gonna make sure this kid had a helluva bad time.

My first thought had been simply to hold his face down in the mattress and suffocate him, but I decided that just wouldn’t hurt enough. I went to the dresser and pulled two items from the top drawer. One was a bottle of poppers. I use them on occasion, but they’re mostly for the fuckmeat. I’ve gotten very good at closing off their mouth and one nostril with only one hand. I hold the bottle in the other; with only one nostril to breathe through, I can force the fumes on them anytime I want. You’d be amazed at how much a nice strong rush helps at the end. Makes them really work my cock. I usually don’t use it if I’m strangling them; they’ll thrash and cum on their own. But if I’m doing something else, a good hit of the poppers helps them shoot, no matter how much agony they’re in.

And this little bitch was going to be in a lot of pain. The other item I removed from the drawer was a razor-sharp hunting knife.

I was stroking my shaft, getting warmed up when the fuckmeat started moaning. Good; he was waking up. I looked at the knife again and thought about the agony I’d be putting him though. The thought made the head of my dick drip. It also put me in mind of the thin walls in this fleabag.

He still hadn’t fully regained consciousness when I fastened the ballgag onto him. One of these days I’m gonna have to build a soundproof room somewhere. I like it when they scream.

He was just starting to struggle when I slammed my tool into his ass. The gag muffled his screams, but he still made a lot of noise.

“Shut up, bitch,” I snarled. “This is what you were looking for. Shut up and enjoy it; you’ll get paid well when I’m done.”

He calmed down. I could feel his firm, smooth body relax under me. Rough play was familiar to him; he’d probably whored himself out for worse. He was likely more pissed than anything else, but he’d take it if it meant more money to buy crack. Even having his hands cuffed in front of him wasn’t too uncomfortable so far since I hadn’t rested my full body weight on top of him yet.

I slammed myself down onto him, thrusting my dick deep inside as he let out another stifled scream. I reached up and pinched off his nose, counting out a good thirty seconds as he writhed and fought. Releasing one nostril, I brought up the bottle of poppers and held there for a count of twenty.

As the rush swept over him, I held the knife in front of his face.

Excellent. He went into full wide-eyed terror. I controlled his panicked attempts to break free; the only result of his frenzied fight to escape death was the movement of his ass on my rod. Nothing feels so good on my cock like fuckmeat fighting futilely for its life.

“Work it, bitch,” I moaned, “work my dick. If you can make me shoot before I shank you, I’ll let you live.” A promise that I could give freely. Shanking him was what was going to make me shoot.

Damn, his little whore ass was good. He’d had a lot of experience. And the hope of staying alive was powerful motivation. Time for another blast of poppers.

Then it’d be time to kill that hope—along with the rest of him.

I held the bottle to his nose much longer this time. Almost too long—he passed out for a moment. His limp body bobbed on the bed in time to the thrusting of my hips.

As soon as he raised his head again, I bent down to whisper in his ear. “Guess what, ya little bitch? I lied—gonna shank ya anyway. Time to die like the useless garbage you are, you fuckin’ whore. Gonna bleed you out and let you die like a dog so I can blow my load. Gonna use your meat as a cumdump and throw you away to fester and rot.”

I filled his final minutes on earth with mind-bending terror and pain. Clenching his hair in my left hand, I forced his head down into the mattress. With my right hand, I rammed the knife through his leather vest into his kidney. I brutally twisted the knife in the wound, carving and slicing into his flesh and organs.

A pool of moisture was forming under the whore’s belly. Not blood; most of the bleeding was internal. It was spunk and it couldn’t have been a reflex. In the end, amid all the fear and pain, the meat had understood that he had always wanted to die as a fucktoy and had shot his final wad. They always do. Deep down inside, they all want to get fucked to death.

I stabbed him a dozen times, filling him with cum each time. I avoided the major organs at first, but at the end, I slammed the knife into his heart with all the force I could, shattering a rib on the way in. The kid went rigid with the death blow, his breath forced out of him in a long, low moan. He bent his body backwards, trying to draw in air; his cheek brushed against mine. It was a vain effort. His lung had collapsed and his quivering heart was slicing itself to shreds on the knife still buried in his back. His body jerked twice, squeezing the last few drops of sperm from my cock. Then he went limp.

I don’t do the whores again after I’ve wasted them. It doesn’t matter how pretty their meat is; they’re whores and death does not purify them. They’re fun for playtime, but they remain unworthy of my love. All that was left now was rotting meat, to be taken out with the rest of the trash. I don’t even bother dismembering them; I know a nice dry creek bed that’s completely secluded. By the time the corpse is found, rain runoff will have washed it miles from the point I dumped it and time will have taken care of the details.

Of course, by the next time it rains, there may be more than one body to wash away. Who knows? There are so many whores out there; whores who in depths of their sick hearts crave the death that I bring them. This is my true calling—to bring peace and rest to those in need.

One thought on “Fantasy Scenario 2” 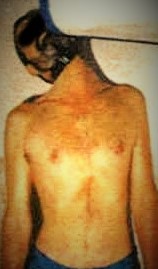